"Now, who was it that gets the banana, and who gets the bucket of fish?"
―Zookeeper

The Zookeeper is a Collectable Minifigure set introduced in 2011 as one of the sixteen minifigures from 8805 Minifigures Series 5. She has brown hair and wears tan shirt and cargo shorts. She comes with a banana and a new black chimp piece.

The Zookeeper has brown hair that is tied into a ponytail with two side partings. She is wearing a cream coloured Zoo outfit with pockets and buttons. On her waist, is a dark brown belt that has a key attached. Her trousers are also the same colour and they have pockets on both sides.

In The LEGO Movie, the Zookeeper was seen in Wyldstyle's flashback revolving around the Master Builders. A Zookeeper was briefly seen as a member of MetalBeard's crew. Around the end of the film when Bad Cop/Good Cop is reunited with Ma Cop and Pa Cop, the Zookeeper can be seen in the background giving Speed Racer a high five.

In The LEGO Ninjago Movie, the Zookeeper can be briefly seen in the crowd of civilians admiring Meowthra for a quick second before the latter attacks the city. 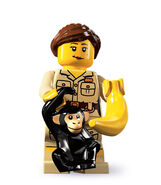 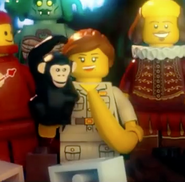 Zookeeper in Lego Movie
Add a photo to this gallery