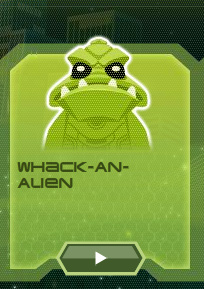 Whack-an-Alien is the second of six Alien Conquest minigames. It was released on May 11, 2011. It is very similar to the classic game Whack-a-mole.

The goal of the game is to hit aliens with a hammer as they pop up out of holes in the ground. You have to hit all of the 40 aliens to win. The aliens pop up from small craters. It is currently available on the Alien Conquest website.

Gameplay
Add a photo to this gallery

Retrieved from "https://lego.fandom.com/wiki/Whack-an-Alien?oldid=1639110"
Community content is available under CC-BY-SA unless otherwise noted.