In TA 3018, Frodo Baggins and his company had a chance meeting with Bombadil in the Old Forest after a nearly disastrous encounter with Old Man Willow. Frodo, who had fled from the tree looking for help, enlisted Bombadil, who had been out gathering water lilies. Bombadil went immediately with Frodo to the tree and commanded it to release its prisoners, Merry and Pippin, which it immediately did. He then invited Frodo and his companions to his home, where the Hobbits had an almost dreamlike stay, feasting and making merry with Tom. In this state, Frodo rather inadvertently told Tom all about the Ring and his quest, and when Tom asked to inspect the Ring, Frodo, without question and without any of the reluctance that tended to accompany giving the Ring to another, allowed him to. Tom then put the Ring on his finger, yet not only did he not disappear, but the Ring appeared to have no effect on him at all. After making the Ring itself vanish with a sleight-of-hand trick, he returned it to Frodo, who, slightly suspicious that it had not made Tom vanish, put it on to make sure it was the genuine Ring. Tom surprised him yet again by revealing that he could see Frodo even with the Ring on, and told Frodo to remove it, stating that his hand was fairer without it.

After two days resting and feasting at Tom's home, the Hobbits set out again, only to be captured the next day by Wights on the Barrow-downs. Fortunately, Tom once again came to their rescue, dispersing the Wights and breaking open their tomb. After this, he escorted the Hobbits to the borders of his land and left them there.

The peril of the hobbits was not over; an attack on their lives was carried out, and their ponies were set loose. The ponies apparently remembered the care they were given in the house of Tom Bombadil, and returned to stay beside Tom's own pony, Fatty Lumpkin. He returned them to Barliman Butterbur, the proprietor of The Prancing Pony. Since he had paid eighteen pence as compensation for the loss, he was now the owner of five fine ponies.

Over a month later, Tom became a topic of discussion at the Council of Elrond. There, Elrond, who had apparently met Tom in times long past, reminisced about him briefly before the question was put before the Council of whether or not to give the Ring to Tom, as it appeared as though Tom may have had power over even the Ring within his lands. However, Gandalf quickly dismissed the idea, saying that rather than Tom having power over the Ring, the Ring simply had no power over Tom. He was immune to its influence, but he could not alter it, nor break its power over others. Additionally, he said that, while Tom might be willing to take the Ring if asked by all the Free People of the world, he might do so, but would not understand the reason. Due to this, Tom would have likely either forgot about it or thrown it away, as such things had little relevance to him. It was also mentioned that taking the Ring back to him would be impossible to accomplish without it becoming known to Sauron, and that sooner or later, Sauron would bend all his power towards Tom's realm to take the Ring back. Despite his mastery within his realm, it was assumed that Tom would not have cared or been able to keep the Ring contained to his realm.

Four years after the One Ring was destroyed, Gandalf spent some time with Bombadil. It is unknown how the meeting was or what they discussed between them. Gandalf remarked to the Hobbits that Bombadil would doubtless have little interest in the tales of their adventures, except perhaps their encounters with the Ents.

Tom Bombadil is entirely absent from Peter Jackson's films, as it was felt he would distract from the story of Frodo and the Ring. He does appear as a character in the LEGO video games, but only as a playable character with no story role.

Token(The Lord of the Rings) 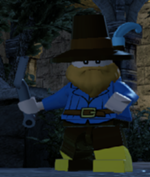 The Hobbit
Add a photo to this gallery