The Stig, Top Gears very own "Tame Racing Driver," is a Promotional minifigure released in October 2012. He only appears in one set: The Stig Key Chain.

The Stig has an unprinted white torso with white arms and hands, and white legs. He also has a white helmet with a black visor.

The Stig is a character on the popular BBC motoring show, Top Gear. He is mainly seen testing fast cars round the Top Gear track and being made fun of as no one knows anything about him. He is also referred to as mentoring the "Stars in reasonably priced cars".

Miniland model of the Stig and fellow Top Gear presenters James May, Jeremy Clarkson and Richard Hammond at Miniland Windsor 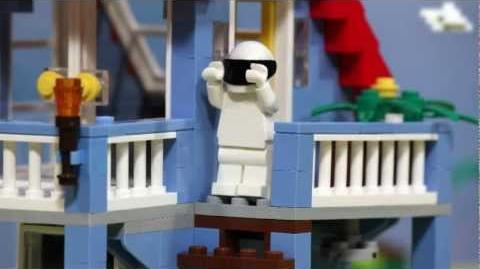 Retrieved from "https://lego.fandom.com/wiki/The_Stig?oldid=1662600"
Community content is available under CC-BY-SA unless otherwise noted.