The Kraken is a minifigure that appears in The LEGO Batman Movie. He originates from Clash of the Titans.

The Kraken in the original 1981 film "Clash of the Titans" Compared to mythology, the Kraken plays a much more major role in the 1981 film. In this movie, it is the pet of Poseidon, and Zeus orders it to destroy Argos to punish Acrisius, the king of Argos, from casting his wife and Perseus into the sea. The goddess of the sea, Thetis, then unleashes it on the city of Joppa as an excuse to punish Perseus. Andromeda was offered to be sacrificed on Thetis' decree as Poseidon releases the Kraken. Perseus uses Medusa's head to turn the Kraken to stone.

The Kraken appears in the 2010 remake as an adversary of Perseus. The Kraken is seen in the beginning, when the narrator explains Hades created it to slay the Titans. He was then tricked to rule the Underworld. It is assumed that Zeus forced Hades to lock up the Kraken so he wouldn't harm anyone. The Kraken was released onto Argos to destroy it, but Perseus slayed it with Medusa's head that turned it to stone.

The Kraken is one of the many villains that joined the Joker as part of his Uber Villains to take over all of Gotham City. As Batman, Robin and Batgirl are flying the Batwing towards the Eye of Sauron, the Kraken chases after them, shoots a fire ball from his mouth aiming at the heroes, inevitably missing due to the Batwing going downwards, causing the fire ball to hit Sauron's Eye and making him collapse. The Kraken, then runs away like nothing happened to his comrad and later gets locked away back in the Phantom Zone with the rest of the Uber Villains (excluding the Joker). 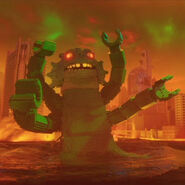 In The LEGO Batman Movie.
Add a photo to this gallery
Retrieved from "https://lego.fandom.com/wiki/The_Kraken?oldid=1961566"
Community content is available under CC-BY-SA unless otherwise noted.