The Great Devourer is a larger Ninjago snake released in the set 9450 Epic Dragon Battle. It is mainly lime and earth green, has two silver fangs, and large red eyes.

The Great Devourer was legendary ancient serpent beast that can grow forever as long as it consumes. It was so powerful that not only can it not be killed, but it also can devour and consume all of Ninjago. Its venom can change the purest of souls and make them evil. It would have consumed Ninjago had it not been for the legendary flutes of the people of Ninjago. Then the good people of Ninjago used their sacred flutes to control the Serpentine, they cast them in their tombs, and locked them up. The Great Devourer was controlled by the flute as well. It then sleeps in the lost City of Ouroboros. It has slept for hundreds of years since the Serpentine once ruled Ninjago. Since the tombs are condemned, they forgot the flute's wisdom.

Years later since, Lloyd Garmadon released the Hypnobrai, to fight the ninja for humiliating him, which caused the release of all the tombs of the Serpentine, most notably the Anacondrai, of which Pythor P. Chumsworth is the last living member of the Anacondrai and declares himself to be destined to reawaken The Great Devourer. But the only way to awake it is to find all four silver Fang Blades which are used to awake the beast. Lord Garmadon was bitten by the Great Devourer as a child, changed by its terrible venom, when the Devourer was a child itself, causing Garmadon to turn evil. It could only be stopped by the Ancient Serpentine Flute. Unluckily, for the ninja and all of Ninjago the last flute has been stolen by Pythor.

Soon, Pythor awaken the Devourer. However, it ate him and Sensei Wu. The Devourer attacked Ninjago City, but the Ninja tricked it, and made it chew his own tail. Then, Lord Garmadon arrives with the Golden Weapons of Spinjitsu and defeats it.

Even after its death, in the 2nd half of Season two, the venom that came when the Devourer exploded caused the revival of the Stone army, making it an indirect major antagonist. In The Curse of the Golden Master it was revealed that the serpentine used the Devourer to scare people underground so they'll be protected against the golden master(Overlord), but that failed. In Secrets Discovered the ninja learned that the Vermillion were the Great Devourer's offspring and possessed the same desire to consume everything.
Warning: Spoiler to follow. Highlight to view content.

The Devourer's attack also resulted in the deaths of Harumi's birth parents, and contributed to her eventually becoming the leader of the Sons of Garmadon. Due to Lloyd's role in unleashing the Serpentine and thus inadvertently bringing about the Devourer's release, she blamed him for her parents' fate and saw Lord Garmadon as a hero for destroying it.

The Prophecy of snakes in war with The Great Devourer

"Young" Garmadon after getting bitten by the "Young" Great Devourer 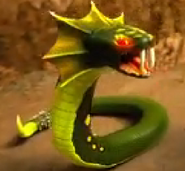 Great Devourer In Commercial
Add a photo to this gallery