The Adventure Journal of Prof. Archibald Hale is a website journal of Professor Archibald Hale available on the teaser website for the upcoming LEGO Theme Pharaoh's Quest. It can be viewed here. A special code has to be entered before opening the diary. The code can be deciphered by using a downloadable table with hieroglyphs, called "LEGO glyphs".


Dislikes:
Camping out
Scorpions in my sleeping bag
Sand in my drawers

August 24, 1924
So excited!! Finally here in Egypt. No more dusty museums and teaching classes for me! Time to find some history! (But where are all the hotels?)

On the trail of Amset-Ra, the "Forgotten Pharaoh". Said to have disappeared thousands of years ago. Research indicates his tomb was around here somewhere. And where there are tombs... there are Mummies!

August 25, 1924
Locals report sightings of walking mummies in the desert. Even odder - reports of Flying mummies!. Have sketched based on descriptions. Can't be real... can it?

August 26, 1924
A Find! Have dug up an ancient sandstone tablet. I'm working on the translation. It will take me couple of days!

THE LEGEND OF AMSET-RA
As translated by Professor Hale

Thousands of years ago, Egypt was ruled by the cruel and mighty Pharaoh Amset-Ra. He had the power to control the fierce beasts of the desert, and enchanted warriors sworn to serve him for all time.

But it was not enough. He commanded his sorcerers to create six magical treasures that would give him even more power, enough to conquer the entire world.

But before the Pharaoh could use the six treasures, they were stolen away. He sent his warriors to find them, but while they hunted the treasures, Amset-Ra was defeated and locked away inside his own trap-filled pyramid.

Now Amset-Ra sleeps, but one day he will awaken and claim his power. You who discover this tablet - it must be your quest to find the treasures and keep them safe. But beware, for the Pharaoh's servants still stand guard, waiting for their master to rise again!

A Quest! And there is a date... if I have calculated correctly, the last sunset this very month! I must stop the Pharaoh - but I'll need help!

JAKE RAINES has done it again!

Fresh off his latest trek through the Amazon jungle, the famous American adventurer and ace pilot is now making headlines in Egypt, where he has stopped an illegal artifact smuggling ring, single-handedly captured a band or caravan bandits, and rescued the British ambassador's prized pet camel from a quicksand pit... all in the last week!

"Hey, I'm just doing what anybody would do," the globetrotting Jake told us. "I was just lucky to be in the right place at the right time!"

But it is unlikely that many others would have shown the same skills, lightning-quick reflexes and fearlessness in the face of danger as this bold young hero, who recently grabbed headlines after his expedition to the Himalayas in search of the legendary Yeti.

This fellow sounds promising! I wonder if he has any friends he could bring...

August 29, 1924
Have met up with Jake Raines! he is certainly every bit the adventurer the news makes him out to be. Not sure he believes in the prophecy of Amset-Ra's return ("Mummies? Magic? What a bunch of baloney!" were his exact words), but he still seems quite happy to join me on my search.

We're currently driving through the Egyptian desert on our way to a site where a pyramid built during Amset-Ra's time may be buried.

Hoping that we will find our first clue to location of the six treasures inside! It would also be delightful to discover some mummies, though not the walking (or flying) kind, of course. Ha-ha...

A warning of the Pharaoh's curse!

Watch out for the booby trap! 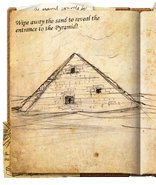 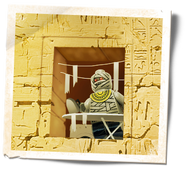 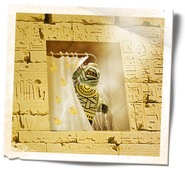 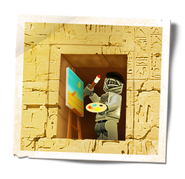 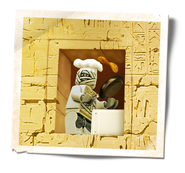 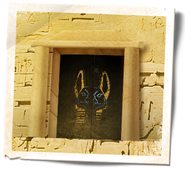 The entrance to the pyramid

Retrieved from "https://lego.fandom.com/wiki/The_Adventure_Journal_of_Prof._Archibald_Hale?oldid=1213438"
Community content is available under CC-BY-SA unless otherwise noted.