Steve Trevor is a DC Comics minifigure who will appear in 2017.

Colonel Steve Trevor was sent by General Tolliver, secretly an agent of the god Ares, to bomb Themyscira. When his jet was above the island, he noticed it was inhabitated and decided not to bomb it, but his co-pilot, also working for Ares, attacked him and the plane crashed. Steve was saved by Princess Diana, who later won the contest to become ambassador of the Amazons and bring Steve back to his country. 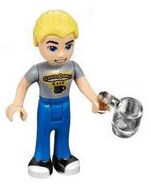 Add a photo to this gallery
Retrieved from "https://lego.fandom.com/wiki/Steve_Trevor?oldid=1914852"
Community content is available under CC-BY-SA unless otherwise noted.