In the year 2099, geneticist Miguel O'Hara worked on recreating the powers of the original Spider-Man for Alchemax, but refused to experiment on humans at such an early stage. Tyler Stone, Miguel's boss in Alchemax, spiked a drug on his drink to keep him loyal and allow the experimentation. To overcome the effect of the drug, Miguel spliced his own DNA and got spider-like powers. Miguel became the new Spider-Man to fight crime and Tyler Stone's corruption.

Soon into his career as a hero, he traveled back in time and befriended Peter Parker, teaming up with the original web-slinger to fight mutual enemies before returning to his original time.

Later on, time aberrations forced Miguel to once again travel back in time, but was confronted by the Superior Spider-Man. He sensed something was wrong, but reluctantly joined forces with Doc Ock. After the crisis was resolved, Miguel was stranded in the present, unable to return to 2099.

Once Peter Parker reclaimed his body, he and Miguel once again united to stop the Green Goblin from taking over New York.

Shortly afterward, Miguel met a woman named Tempest Monroe, who he fell in love with, and took a job at Parker Industries while fighting crime in the modern era and looking for a way to return to his version of 2099. 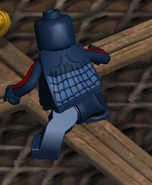 Add a photo to this gallery
Retrieved from "https://lego.fandom.com/wiki/Spider-Man_2099?oldid=1961760"
Community content is available under CC-BY-SA unless otherwise noted.