"Run, run, run away! My arrow will find you, anyway!"
―Before shooting a Skreemer

The Soul Archer is a Ninjago Minifigure released in 2015.

The Soul Archer wears a blue ninja hood with a mask covering his mouth and a purple headband on it. His eyes are green. His head is unknown for now, but in a teaser image, his head appears to be Sand Green. The Soul Archer has a red torso and some decals on his torso. The arms of Soul Archer seem grey and look like cloth, his legs are a greenish color, similar to that of Bansha's. He also uses a new Transparent Green piece instead of his legs, with an slimy appearance that represents the Ghosts' tails.

His weapon is a black bow and arrow, used previously in Minifigures like Hawkeye. He also sports a grey dagger along with his main weapon.

It has been said that Ronin owes a huge debt to the Soul Archer, and that if he does not supply him with what he needs, he will send Ronin to the Cursed Realm.

When Morro obtained the Allied Armor of Azure, he used it to summon the Soul Archer from the Cursed Realm, back to Ninjago. 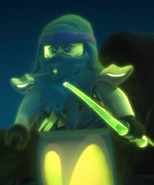 In The LEGO Ninjago Movie Video Game.
Add a photo to this gallery
view · talk · edit Ninjago minifigures
Retrieved from "https://lego.fandom.com/wiki/Soul_Archer?oldid=1943555"
Community content is available under CC-BY-SA unless otherwise noted.