Sloth was first seen annoyed by his brother, Jake Fratelli, who was singing and harassing Sloth as he threw food at him, until Mikey pushed the food dish back to Sloth with a broom stick after Jake left. Later, Mikey showed the other Goonies Sloth, who then roared at the wall causing them to scream and run out of the door towards the tunnel from an old fireplace.

He was later seen again watching TV and roaring until he met one of the Goonies, Chunk, who was captured while trying to get help as instructed by Brand and Mikey. Sloth and Chunk became best friends after Chunk gave Sloth a Baby Ruth candy bar after Sloth saw a chocolate cake on TV.

Later, Chunk attempted to call the Police, but Sloth caused the phone to disconnect while eating rocky road ice cream. Soon after, Sloth and Chunk walked past the dangling water pipes, until Sloth pushed the pipes back upward in a fit of rage with his superhuman strength, causing a car crash.

He was later seen with Chunk rescuing the Goonies who were forced to walk the plank at the Inferno, before learning that his Mama dropped him as a baby, which could be the reason for his deformed appearance. Sloth helped the Goonies escape the grotto when it started to collapse, much to Chunk's distress. It is confirmed that Sloth with his mother and brothers somehow escaped the collapsing grotto, however, Sloth was mistaken for a criminal but was saved from being arrested by Chunk who told the police to arrest Mama, Jake and Francis Fratelli.

Sloth was eventually adopted by Chunk's parents after Chunk told him he loved him and watched the Inferno sailing off to the ocean at sunset, after being trapped in the grotto for centuries as a "Good-bye Goonies and thank you for the marbles" from One-Eyed Willy at the end of the movie. Sloth is now an honorary Goonie after the Goon Docks were saved from foreclosure. 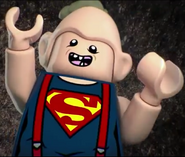 Add a photo to this gallery
Retrieved from "https://lego.fandom.com/wiki/Sloth?oldid=1923616"
Community content is available under CC-BY-SA unless otherwise noted.