Sometime between the events of LEGO Island 2 and Island Xtreme Stunts, Sky Lane moved to LEGO Island and became friends with the game series' main protagonist, Pepper Roni. When Pepper becomes star of Xtreme Stunts, then being filmed on the Island, Sky also becomes his sidekick.

Although she does not generally appear during minigames of the filming of the movie, Sky somehow always manages to appear in the final shot. Because of this, she does not appear again until near the end, when the Brickster attempts to use a supercomputer within his tower to deconstruct the entire world. As Pepper fights the Brickster atop the tower, Sky appears via helicopter and gains access to the computer.

She is unable to stop the computer's countdown, but reprograms it to self-destruct. Pepper, the Infomaniac, and Sky are then able to escape the tower on board her helicopter, leaving the brickster to fall with his tower and be captured and sent back to jail.

In the theme Island Xtreme Stunts, the chain of events is the same. Sky is still Pepper's friend and helps him fight mischief on LEGO Island. She chases after the Brickster by motortrike, fights his henchmen and the Brickster himself at the Information Center, (Known as the Xtreme Tower), and wake-boards behind the criminal on the island coast.

Sky Lane does not appear again for almost ten years until the release of the online game, LEGO Universe. In it, Sky is a captain with Nexus Force Faction Venture League, and is in command of the starship Venture Explorer, a tutorial world. When the ship is attacked by the game's enemy, the Maelstrom, Sky oversees that players get off the ship safely.

She later appears in Avant Gardens, the second game world, and is delighted that players have survived. She offers several missions to join the Nexus Force, return to the starship, and recover bowling balls for her.

Later, players will find the Sky Lane has a sister on Nimbus Station named Velocity Lane, a race master, who runs the Vertigo Loop Racetrack. Another sister, Peppermint Lane, appeared for a short time as the host of a race called Space Blizzard in the winter world, Frostburgh. All three sisters are daredevils in nature.

According to Dean Roskell, she was intended to be a character who could impress Pepper with similar skills, with a goal to have someone he could have a crush on. 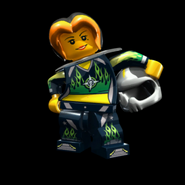 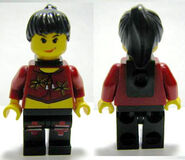 Front and back.
Add a photo to this gallery
Retrieved from "https://lego.fandom.com/wiki/Sky_Lane%5CLuna_Rom?oldid=1937061"
Community content is available under CC-BY-SA unless otherwise noted.