Sheik Amar is a minifigure from Prince of Persia. He is a mentor and good friend to Dastan.

He has tan cloths, a turban, a black mustache and a black beard. He once saved the life of Seso. On LEGO.com in the bios, he wears Hassansin garb and has a large mustache. It picture of same Sheik Amar with nervous one replace a Hassansin Sheik Amar picture at LEGO.com.

Sheik Amar, the master of the Valley of the Slaves, has got a big sense of humor and loves gold. He used to own a ostrich racing track as well as a gambling den. Amar encountered Dastan and the princess riding through his realm. Dastan and the princess escaped, but Amar eventually caught them he told them that his valley was taken away and he only had one ostrich left. He was told there was gold in Alamut, so he and Seso helped them to retrieve the dagger. When Dastan turned back time, Amar's gaming empire was back in business. 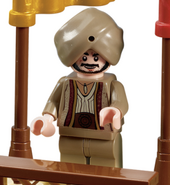 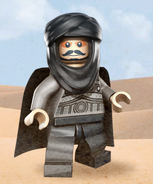 Another picture of Sheik Amar animated