Shadow Knights were the main part of Vladek's army in Knights' Kingdom II duirng 2004 and 2005 before they were replaced by Rogue Knights. The only action figure released based on the characters, 4942 Shadow Knight, was part of a Nestlé promotion.

Shadow Knights have black helmets, hands and legs. Their hips and arms are a dark red colour and the torso, otherwise black, has printing of a red breastplate with a silver and black scorpion in the middle. The face is scowling and has a full beard.

This variation is nearly identical to the first one, the only difference being that the black helmet has silver speckles on it. These Shadow Knights do not appear in nearly as many sets as the first variation.

The third and last variant, this one is drastically different from the other two. The head is the same as Vladek's: there are dark lines on the face, highlighting a deep scowl and circles around the eyes. There is no beard on this variation. They wear silver-speckled black helmets and body armour. Their hands and hips are dark red. These Shadow Knights are also called Elite Shadow Knights.

The Shadow Knights were once loyal knights of Morcia, but Vladek, using his dark magic and the Book of Morcia, transformed them into mindless servants to do his bidding. They locked away the king when he rose to power and became the backbone of his army. When Vladek was defeated and put in prison, the Shadow Knights turned back into the knights they were. This happened repeatedly and Vladek finally resorted to other assets, employing Dracus, Karzon and the Rogue Knights instead.

The Shadow Knight shown in the concept art was originally designed as Vladek's solitary henchman, a knight who resorted to sabotage to defeat his foes. However, in the end, the Shadow Knights became a mass produced army controlled by Vladek. The original concept later inspired Karzon.[1]

A Shadow Knight in the online comics 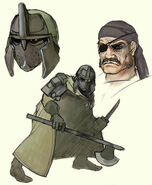 Concept art
Add a photo to this gallery

Retrieved from "https://lego.fandom.com/wiki/Shadow_Knight?oldid=1893787"
Community content is available under CC-BY-SA unless otherwise noted.