Sebulba is a Star Wars minifigure introduced in 1999, with a redesigned version included in the 2011 set 7962 Anakin's and Sebulba's Podracers.

1999 Variant- The first Sebulba minifigure was completely grey with no printing. It was only one piece, so there were no moveable parts. It was molded exclusively for the Dug species' shape and is exclusive to him. This version is exclusive to 7171 Mos Espa Podrace.

2011 Variant- Sebulba's latest variant has been completely redesigned. The mold is more detailed and now has printing. It is made up of 3 pieces (a torso and 2 legs), allowing the legs to move freely. All 3 pieces are Dark Stone Grey, but they are printed with various colours that add detail and highlight Sebulba's features. His legs have molded straps on the wrists, and the hands have flesh-coloured printing. His head and hind legs are molded into the torso, so they cannot move. Sebulba uses his hind limbs to steer his Podracer, so they are adjacent and can grip the LEGO shafts and hinge pieces used for his podracer controls. They have light purple and flesh-colored printing. The head has molded goggles printed with purple lenses and white and black eyes. The rest of his face and neck also contains flesh and purple printing. This variant appears in two sets: 7962 Anakin's and Sebulba's Podracers and 9675 Sebulba's Podracer & Tatooine.

Sebulba was a famous Dug Podracer pilot and one of Anakin Skywalker's competitors in the Boonta Eve Classic of 32 BBY. A renowned cheater, he pulled several dirty tricks in that race alone; deliberately ramming Mawhonic into a cliff face, using an illegal flamethrower to destroy Clegg Holdfast's podracer, tossing a metal tool into Mars Guo's air intakes, and sabotaging Anakin's engine pod before the race. Despite the sabotage, Anakin persisted in challenging him for the lead, and after several attempts to ram him off the track, Sebulba's podracer finally got hooked up on the boy's. The damage caused Sebulba's power couplings to fail and destroyed his podracer. Sebulba himself survived. Never one to miss an opportunity for glory, he then purchased Anakin's podracer after the race and immediately resumed his notorious career. 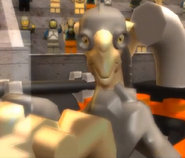