"I dont know who You are, but this is MY CAVE!"
―Scorm

Scorm is a Legends of Chima minifigure released in 2014. He is the King of the Scorpions, and replaces Cragger as the main antagonist of the theme.

Scorm is a unique minfigure. Although he is all black with lines of gold (and gold arms with black hands) and tiny green diamonds, he looks completley different with his gear on. First, his head mold is mainly gold, with black triangles on the upper parts of his head, which point at a black sheild shape on the very top of his head, with a golden scorpion design of top. He has an entireley golden face, with 4 white teeth on the bottom, as well as 2 large curved fangs. He has a completely unique golden armor mold, with it having more layers, patterns, and ridges than normal armor, being better than the original armor, but not quite as protective as the new silver Outlands armor. On the back, it goes down to the bottom of the chestpiece, where his brown stinger is attached. His legs are black with golden lines and patterns, and tiny diamonds, and have two white fang like claws for toes.

Scorm was conniving, evil, and vicious, and was created by the CHI Laval dropped in the Gorge of Eternal Depth. Scorm quickly took his position as leader, demanding more CHI from Crominus and Crunket, and captured them both. He found Mount Cavora, but in that time, the Crocodilian prisoners had escaped. Scorm sends the bats after them, and they form the dark cloud, and recapture Crominus, as well as making the CHI waterfalls in Mount Cavora run dry. Scorm also captures all of the Legend Beasts, with the exception of the Crocodile, who finds his way to Chima and was cared for by Cragger and Lavertus.

In The Legend Thief he controlled the Raven Legend so it could steal golden Chi. The chi was used to build fortresses and a statue of "The Great Scorpion in the sky". Whom he believed dropped the chi down the gorge and created the dark tribes. After Razar, Laval, and Lavertus rescued the raven legend, it grabbed scorpions covered in gold paint and dumped them into a pile. Scorm got off a sting, but the greed of Ravens overpowered the sting's venom. Razar asked Scorm "What color is your armor?". He answered "Why gold of course". The Raven legend picked up Scorm, and dropped him in a pile of his soldiers. He later looked at Razar's Speedor and after tasting the wheel he had an idea. He ordered the bats to chip rocks off of Mount Cavora to be used in Speedors for the Dark Tribes.

In The Eagle and The Bear he was pleased to see Speedorz are made. He captured the Bear Legend, and ambushed Laval with his Speedor troops, also learning the name of the vehicles. Although Laval is superior in Speedor riding, Scorm ambushed them with his troops, and captured a sleeping Bladvic and Legend Beast, but got defeated when Bladvic's snoring caused an avalanche.

In Tooth or Consequences, Scorm was shown with the Wolf Legend Beast and Crominus. When the Wolf Legend Beast could not be contained, Scorm stung it, putting it in a hypnotic trance. He also added Worriz and Cragger when Plovar gave them away. As they observed, Spinlyn and Scorm had a mutual dislike for each other, and Cragger thought about using it to his advantage. When the others went in for a rescue mission, Scorm and his troops used their speedors to ambush them, but Laval's CHI Banger grenades defeated everyone except Scorm. But Scorm still had more troops, and he entered his Scorpion stinger to join the brawl. When they had the advantage, Cragger told them the story of Laval throwing the CHI in the gorge of eternal death, and that instead of the Great Scorpion, there should be a Great Lion. Sadly, this did not work, and instead the heroes turned against Laval, Cragger, and Eris. When Laval rushed into battle alone, a well aimed shot from Scorm's Scorpion Stinger landed a direct hit, and seemingly killed the Lion prince.

In This May Sting a Bit, Scorm's troops seem to have had the upper hand, until Laval came back in with the final Legend Beast. With the troops outmatched, Scorm used his gun to block off all of the exits. He blocked off every exit but the last, until Rinona and Lavertus came in with the Wind Shadow. They held the troops off, as Lagravis used his golden CHI to make pillars to support the falling boulders, while sacrificing himself. As the stronghold was buried in rocks, Scorm is revealed to have been the lone survivor, and had his head peaked out of an opening. Laval started to lecture him about "inner CHI", when Scorm cut him off to ask for CHI. Laval simply gave it to him, saying that they share in Chima, and gave his father's famous line, "Use it well. Use it wisely", before the bolder collapsed. Being alone in his giant cave, he threw it down a gorge because he realized that it was Chi that made him what he is and what his desire for power did to him: made him alone, broken and defeated. He tossed the orb and said "No more CHI!". Little did he know that he had just awoken Sir Fangar who was shown at the end, frozen in ice.

In Season 3 he meets up with the remaining Crawlers, and it is revealed that he was not the only one alive. Two scorpions offer him all of the stolen CHI, which could help them but Scorm doesn't want it and tosses it down the gorge. Sir Fangar uses this chi to revive the ice Tribes. Scorm sees the ice freeze over the scorpions, and gets in his Scorpion Stinger. He shoots at them, but the blasts are frozen, and without them even trying, the scorpion king is frozen by the Ice Tribes.

In episode 36 Flinx accidentaly un-freezes all the captives in Sir Fangar's fortress, but he also starts to melt the dark tribes. As Laval and Cragger happily reunite with their parents, Scorm reveals himself and starts to fight the tribes. He, Spinlyn, and Braptor gather their warriors and beigin an all out war against the good tribes. Scorm is once more, mad with power. While fighting Laval he mentions that it was him who dropped the chi that reanimated the ice tribes. Eventually Crominus, Crunket and Lagravis beat the outland tribes for all they've done to them.

Scorm talking in the TV series

Scorm and others on their Speedorz in the TV series 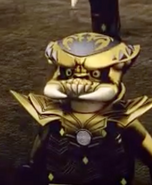 Scorm without his Armor or Helmet