Damian Wayne is a DC Comics Super Heroes minifigure who appears in 2014. He First appeared as a playable character in LEGO Batman 2: DC Super Heroes with downloadable content from EB Games and Amazon.[1] He was released in physical form in the 2014 set 76013 Batman: The Joker Steam Roller, and again in the 2016 set 76056 Batman: Rescue Escape from Ra's al Ghul.

Damian uses the tousled hairpiece in black and his head is printed with a large green mask similar to Robin (Tim Drake)'s juniors variant and a double sided face: aggressive and scared. The torso is red with black arms and green hands and the torso is printed with Damian's Robin logo, seams representing the plates in his armour, the suit's cut on his young body, and a yellow belt with a "R" belt buckle and several pouches. The back is printed with the continuation of the seams for the armour , the suit's cut, and the continuation of the belt with several pouches. He has short black legs to represent that he is a child and a short yellow cape to reflect the use of his short legs. He is armed with a black staff.

Damian Wayne has a red torso with his Robin logo on his left side on his chest and a yellow utility belt with a circle on the middle of it. His arms are black and his gloves are green. He has black hips and legs with green boots. His cape is yellow outside and black inside.

Damian is the son of Bruce Wayne and Talia Al Ghul. Under his mother's care, he has been trained by the League of Assassins. After Talia reveals Damian's existence, she dies leaving him to his father. He then joins Tim Drake with the mantle of Robin, leaving Batman with two Robins. After Bruce's temporary death, Dick Grayson becomes Batman and takes Damian under the mantle of Robin, thinking Tim as more of an equal than a sidekick. Tim begrudgingly becomes Red Robin and Damian takes over as Robin. After Bruce returns and resumes the mantle of Batman, he and Damian fight crime as father and son.

Robin is a member of the Bat-family which primarily consists of Batman, Nightwing, Red Hood, Red Robin, Alfred Pennyworth, Batgirl, and Commissioner Gordon. 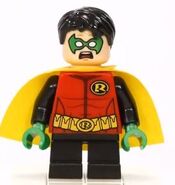 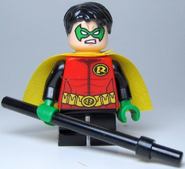 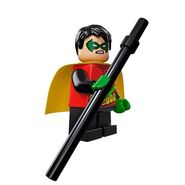 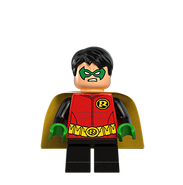 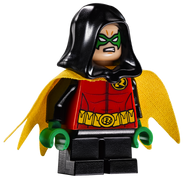 In LEGO DC Super-Villains
Add a photo to this gallery

Retrieved from "https://lego.fandom.com/wiki/Robin_(Damian_Wayne)?oldid=1962645"
Community content is available under CC-BY-SA unless otherwise noted.