Rey is a Star Wars minifigure released in September 2015. She is the main protagonist of the sequel trilogy.

Rey is from Jakku and is dressed in tan, ragged clothes, and occasionally wears a mask consisting of a scarf and goggles. She has freckles and brown eyebrows. Her hair is brown and worn in a three-bun hairstyle.

Rey was a scavenger from the planet Jakku who was abandoned by her parents at an early age, becoming a scavenger for Unkar Plutt, all the while waiting for her parents to return. She found and befriended the Resistance droid BB-8, and helped him and former Stormtrooper Finn to get to the Resistance base so BB-8 could bring a map with Luke Skywalker's location. When Rey met Maz in Maz's cantina, Rey touched Luke Skywalker's old lightsaber and had a vision. Maz then gave Rey the lightsaber, but Rey did not want it so Maz gave it to Finn instead. Maz's cantina was then attacked by the First Order. Rey was captured and taken to the First Order's base, but force mind-tricked a stormtrooper, escaping her restraints. She then sneaked around the base before running into Finn, Han Solo and Chewbacca, who had come to save her and lower the shields, which they had already made Captain Phasma do before throwing her into a garbage chute. She installed explosives on the pillars of the thermal ocilators with the rest of the crew, and watched Han Solo confront Kylo Ren when he arrived, only for Han to be stabbed through the stomach with a lightsaber. She escaped with Finn and Chewbacca, and ran into Kylo Ren outside while Chewbacca went to get their ship. She was force pushed into a tree, being knocked out, before barely regaining enough conscious to watch Finn get cut down by Ren. He then tried to force pull Finn's lightsaber(Luke's lightsaber) towards himself, but as it was flying through the air Rey also force pulled it, the momentum carrying it past Ren and into her hands, where she dueled with Ren as Starkiller Base (the planet superweapon that was also the First Order's base) collapsed around them, having been destroyed by Poe Dameron and his two squadrons, finally severely hurting him as well as destroying his lightsaber before escaping with Chewbacca and Finn's unconscious body, though Ren escaped with General Hux. After returning to the Resistance base on D'Quar, she went with Chewbacca to find Luke Skywalker on Ach'To after the map to Skywalker was put together by BB-8 and R2-D2. She found him in the ruins of the First Jedi Temple, offering him his lightsaber.

She later convinces Kylo Ren to train her in the ways of the Jedi, during which she and Ren share a connection. Later, she leaves Ach'To, goes on board the Supremacy and is brought before Supreme Leader Snoke by Ren. She witness Ren kill Snoke and they both fights his guards. After the duel, Ren offers her to rule the galaxy with him but she refuses and escapes the ship.

She and Chewbacca help the Resistance battle the First Order and helps them escape by lifting the rocks that is covering their way. She along with Leia senses Luke's death through the Force. She along with the resistance escape in the Millennium Falcon. 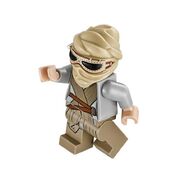 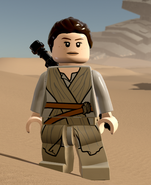 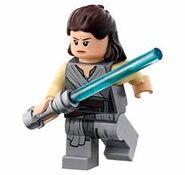