Reegull is a member of the Raven tribe who claims to be the most famous alchemist in all of Chima. He was held hostage for a time before the Lions and their allies rescues him from the Rhino tribe.

Reegull continued to meet with a general and Elida in secret and helped them to discover the secret behind the mysterious orchids growing throughout the kingdom. However, Reegull showed his true colours later when he attempted to create more Raven-Eagles like himself and revealed that he was allied with the Crocodiles.

Crooler went to him for mind control potions and instead gave her fake Chi. Cragger wished to give it to everyone in Chima. When he gave it to the Ravens they explained that it's "Reegull's Chigull" and that if it works they would sell it by the truckload. After this speech Crug acts like a bird as a side effect of the Chigull. Reegull explains that as a hybrid neither tribe wanted him and he can't even fly. He made the Chigull so everyone in Chima would be like him. After the event is over Laval and Cragger attach Bellow plants to him and pop them and watch Reegull fall. 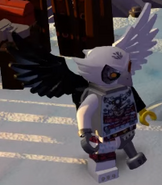 Reegull in LEGO Dimensions
Add a photo to this gallery
view · talk · edit Legends of Chima Minifigures
Retrieved from "https://lego.fandom.com/wiki/Reegull?oldid=1890883"
Community content is available under CC-BY-SA unless otherwise noted.