Red Robin is a Super Heroes minifigure who appears in handheld versions of LEGO Batman 2: DC Super Heroes and in LEGO DC Super-Villains.

Red Robin has a cowl similar to Batman's, but without the bat ears. He has a black cape. He has a red muscular torso with diagonal, black straps with small, yellow canisters going up his chest which meet at the cape and connect to it with a yellow circle and is decorated with the Red Robin logo. The torso also indicates a belt with the same style as the straps and a yellow buckle. His hands and legs are black while his arms are red.

Tim Drake was the third Robin who used the Red Robin name after the Robin mantle was passed on to Damian Wayne.

Red Robin is a member of the Bat-family which primarily consists of Batman, Robin, Nightwing, Red Hood, Alfred Pennyworth, Batgirl, and Commissioner Gordon. 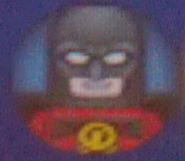 Classic
Add a photo to this gallery

Retrieved from "https://lego.fandom.com/wiki/Red_Robin?oldid=1914668"
Community content is available under CC-BY-SA unless otherwise noted.