"It was all going great until the twist at the end!""
―Psyclone

Psyclone is an Ultra Agents villain released in 2014 and later reappeared in 2015 at the second App.

Psyclone wears an Earth Blue helmet, which features a rectangular hole in the middle in the place of the eyes and grey respiration tubes in the sides and other two covering his torso. His face is Bright Yellow and it's two-sided - one with a silver mask with many details and googles featuring a missing lens and a red one; and in the other he doesn't have the mask, revealing his grey, bushy eyebrows with a metal eyepatch covering his missing eye. His surviving eye is red. He wears a Brick Yellow jumpsuit in all of his body, with silver arms and grey hands. His torso printing features an Earth Blue breastplate with belts above the same; and also a propeller in colored in Metallic Orange. His leg printing has a belt on his hips and Earth Blue armor at the sides of these. He wears in his back giant silver propellers with Transparent Green cones at the back, all connected by mechanical arms to his back.

Psyclone was originally a weathercaster who turned evil after being sucked into one of AntiMatter's vortexes in West Village.

In the Ultra Agents App, he marked his first appearance at Mission 5: Hurricane Heist, where he attacked the Astor City bank in Downtown during the latest arrival of a cargo truck full of money. He sucked all the money with his gigantic transforming mech, creating winds and vortexes. However, Agent Jack Fury stopped him by using gold bars to damage his mech. After that, he tried to escape in the storm, however, the Ultra Agents managed destroyed his mech and capture him.

He later returned in Ultra Agents: The AntiMatter Missions, where he was found imprisoned at Mission 1: New Base, New Gear & New Enemies, as the Ultra Agents were in a tour across the newest HQ in a cargo bay.

He didn't appeared until Mission 4: The Trap is Sprung, where the AntiMatter's plan was successful and managed to free all the captured super villains using his minion, Invizable. After the invisible super villain managed to destroy the cells with portal bombs, Psyclone, along with Terabyte, Tremor, Spyclops and Adam Acid managed to escape through the ceiling.

After the breakout, at Mission 5: AntiMatter Strikes, all the super villains started to collect only the purest civilians of Astor City, preparing them for the AntiMatter's arrival. After the uber villain entered to Coleport, Psyclone along with Infearno was seen collecting the citizens inside of a giant, electric orb held by the AntiMatter Staff.

After the citizens were ready to leave, Agent Caila Phoenix arrived with the UltraCopter, but she was intercepted by Psyclone, Infearno and Spyclops, however, she managed to destroy all of them at once. Later that day after Solomon Blaze's sacrifice, Psyclone was seen among the other captured super villains, inside of blue cages.

"Cash, gold, cash, cashcow!"
―Psyclone
"One million and one, one million and two...all these numbers are making my head spin!"
―Psyclone, while stealing all the money in the bank.
"Looks like my 'golden opportunity' didn't pan out the way I thought it would!"
―Psyclone, after the gold bars damaged his mech. 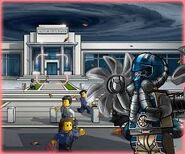