Professor Samantha Rhodes is a character of the Atlantis theme. She appears in LEGO Atlantis: The Movie.

Although Professor Sam Rhodes is not officially a member of the Atlantis Deep Sea Salvage Crew, she has tricked them into helping her look for Atlantis. She is intelligent and enthusiastic, but tired of people not believing her, especially about Atlantis. This results in her into being willing to do anything to accomplish her goals. She dreams of being respected by other scientists and the salvage team. Her jokes are smart, but too smart so that they aren't always understood by the team. 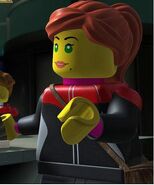 Samantha giving a speech from LEGO Atlantis: The Movie.

Retrieved from "https://lego.fandom.com/wiki/Professor_Sam_Rhodes?oldid=1830289"
Community content is available under CC-BY-SA unless otherwise noted.