"Don't you even think about it! (Cannon heads at him by Bart Simpson) You ARE thinking about it, aren't you?"
―Principal Skinner to Bart in Brick Like Me.

Principal Skinner (Real name: Armin Tamzarian) is a minifigure who appeared in the Simpsons special episode of Season 25, "Brick Like Me".[1] 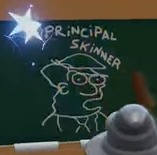