This character is included in 8078 Portal of Atlantis. The Minifigure is equipped with a completely new golden helmet and breastplate, as well as a trident that had already appeared in previous Atlantis sets.

The Portal Emperor represents one of the six guardian races of Atlantis that are all styled after sea creatures.

Atlantis Warrior with no armour 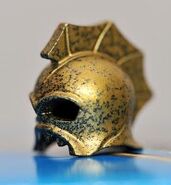 Retrieved from "https://lego.fandom.com/wiki/Portal_Emperor?oldid=1894597"
Community content is available under CC-BY-SA unless otherwise noted.