Poggle the Lesser is a minifigure released in 2013. He is also a playable character in the LEGO Star Wars III: The Clone Wars video game.

Poggle the Lesser is mostly sand yellow and features printing of gold and black apparel on his chest, back, hips and upper legs, all of it with intricate designs, depicting royalty. His stomach has no apparel and has printing of exoskeleton-like plates, printing that's continued on his lower back. Poggle's arms and hands are unprinted. A clear plastic cape-like piece wedged between his head and neck. It is split into four sections, each with slightly transparent brown wing printing.

Poggle's head is a unique mould. It has a large beard-like spike of a wattle draping down the centre of his torso and two small ones to each side. He has a downturned mouth and two nostrils where a nose might be. There are ridges above his eyes and wrinkles below them. Poggles head has a wide crest shaped roughly like a crown on top.

In LEGO Star Wars III: The Clone Wars, Poggle the Lesser appears in the Geonosian Arena and Legacy of Terror. He can be purchased after from the Resolute's brig after the latter is completed.

Poggle does not appear in any other game.

Poggle the Lesser was Archduke of Geonosis and a leading member of the Separatist Alliance. He played a vital role the beginning of the Clone Wars, as his droid factories produced the majority of the Separatists ground troops in the first battles. He was present in both Battles of Geonosis. He ultimately met his end along with all the other Separatist leaders when Darth Vader was sent to execute them. Poggle attempted to fight the Sith lord off with his cane, but it didn't do anything and he was killed by a slash across the neck. In LEGO media, he speaks Geonosian, causing other characters to feel awkward because of his unique noise.

The Geonosian who took Lesser's place in LEGO Star Wars: The Video Game 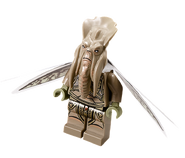