Jean Grey was one of the founders of the original X-Men. She had natural telepathic and telekinetic powers and was a human host for the Phoenix Force, an ancient cosmic entity which granted her additional powers. However, due to the Phoenix Force's instinctive and possessive nature, it sometimes would cause Jean to turn against her allies with little provocation. 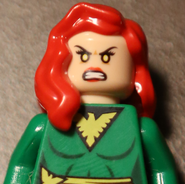 Jean Grey and Hulk in front of the Blackbird