Nova is a Marvel Super Heroes minifigure released in 2013.

Nova has a new mould to represent his helmet and a face, in the same style as Catwoman's goggled face depicting goggles with a white visor behind the eye-holes to make the eyes appear white and is double sided with serious and angry expressions. His body is dark blue with yellow hands. The torso is printed with a collar, yellow circle, three of them, connected by a thick yellow line in a "V", a yellow belt, and black lines to show the suit's cut on his muscles. The back has the three circles connected by the line from the front, the back of the collar and belt, and the suit's cut on his back. He comes with two transparent red studs on his hands.

Sam Alexander hadn't had a family in awhile, and grew close to Aunt May because of it. At one point, he was inducted into the Nova Corps. He was then mentored by Rocket Raccoon and afterwards joined him as a member of the Guardians of the Galaxy, which also included Star-Lord, Groot, Gamora and Drax the Destroyer. But he later left the team for Earth.

On Earth, he became the superhero Nova, and joined S.H.I.E.L.D. to learn how to be a better hero under Nick Fury. Fury then assigned him to a team originally led by Deadpool (who left S.H.I.E.L.D. to become a mercenary and was replaced by Spider-Man). The team consisted of Iron Fist, Power Man and White Tiger. He fought villains such as Venom, Dr. Doom, Beetle, Doc Ock, Sandman, Lizard, Rhino, Carnage, Kraven the Hunter, Electro, and Green Goblin.

He and Spider-Man later teamed up with the Guardians of the Galaxy to save the Earth from Korvac and his Chitauri. Afterwards, he was asked to rejoin the team and initially accepted but later declined, deciding to stay on Earth with Spider-Man.

Gallery of the Variants 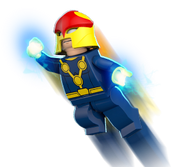 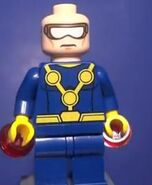 Nova with his helmet off 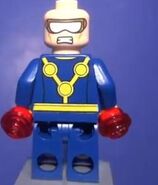 Nova in LEGO Marvel Super Heroes 2
Add a photo to this gallery
Retrieved from "https://lego.fandom.com/wiki/Nova?oldid=1921971"
Community content is available under CC-BY-SA unless otherwise noted.