Nexo Knights is a fantasy-based Castle theme that was introduced in 2016 and ended in 2018. The theme is set on the realm of Knighton, and follows the adventures of five young Knights who battle to defend their home from Jestro, Monstrox, and his monster army.

The sets officially launched on January, 2, 2016, although some of the sets came out as early in various stores as late December 2015. Similar to the Ultra Agents, Nexo Knights features an App that can be interacted by using physical LEGO pieces.

Like Ninjago and Legends of Chima, a TV series named Nexo Knights: The Animated Series was released on Cartoon Network on January 11, 2016 with a second season released on August 13 of the same year.A third and fourth season were released in 2017. A fifth season was planned and sets based of it were produced, However, it was cancelled and the story for the sets was never explained in any media.

Nexo Knights is a fantasy-based Castle theme. Unlike its predecessors that contained typical medieval elements, usually with a fantasy theme, Nexo Knights gives those elements a futuristic look combining both technological and magical aspects. Like some previous castle themes, it features two factions, the heroes being the Knights, and the villains being magical evil creatures. The sets features Nexo powers that can be used on the Nexo Knights app.

In the case of the lava army, they feature brown as they primary color scheme with transparent orange bricks for the lava. The designs of the vehicles have monstrous aspects with white fangs and horns, and its weapons have lava designs.

The Ultimate armor sets includes one character with an exclusive design, and a set of accessories matching with the character’s faction, and includes three Nexo Powers. Unlike Ninjago’s Spinners or Chima’s Speedorz, these powers are the first to feature in a video game linked to the show.

Just after the Knights Academy Graduation Ceremony, Jestro stole the Book of Monsters and attempted to destroy the kingdom. The 5 young graduates of the Academy; Clay, Lance, Macy, Aaron and Axl will have to fight to save the kingdom. With the support of Merlok 2.0, Ava and Robin, the knights will go on a epic adventure.

Even though the knights have managed to defeat Jestro and the Book of Monsters from the previous season, they have to find the Magic Books that were scattered across the kingdom before the bad guys could.

It has been months since the destruction of the Book of Monsters. The knights have made lives for themselves. Clay is a teacher at Knighton Academy, Lance is a host for the Knighton News Network, Aaron is a stunt performer and Axl is a TV chef. On Princess Macy's part, she has been unsuccessful at getting each of the towns to be more defensive from future monster attacks. But all is not well. A storm is brewing over Knighton as Jestro tries to make amends with the people he has wronged to no avail. Monstrox has taken the form of a storm cloud and once again takes control of Jestro by zapping him with his evil lightning. Arriving at a fortress in Ghoulia, the Cloud of Monstrox raises an army of lightning-infused Stone Monsters. His first target is the new Lavalands Amusement Center that was established by Mr. Richmond on the property of the Lava Monster Army's former base. When Lance is overwhelmed by the Stone Monster Army, Merlok summons the rest of the knights. Meanwhile, Jestro and the Cloud of Monstrox go under the amusement park. When Jestro finds Monstrox's former Book of Monsters body, the Cloud of Monstrox tells him to hold onto it as he has grown attached to it. Jestro then uncover the staff that Monstrox used before he was split into different spellbooks.

Jestro gains the idea to ambush the Fortrex in hopes of cheering up the Cloud of Monstrox unaware that the knights are at the party. Fortunately, Ava is able to restore Merlok 2.0 to the Fortrex and he is able to provide the Knighton Academy students with a Nexo power that allows them to fight back against the Stone Monster Army, forcing them to retreat (as they do not have the Cloud of Monstrox to reanimate them) much to the Cloud of Monstrox's amusement. Back at the party, Macy loses control Clay's battle suit forcing the Nexo Knights to pin it down. After the party, they reveal the truth about Clay to King and Queen Halbert and they agree not to mention it to the rest of the kingdom.

The fifth wave of sets in 2018 had Monstrox becoming a computer virus and sending tech infection monsters to attack the Realm of Knighton but this series was cancillled do to lego's budget.

The adventure takes place in the medieval yet futuristic Kingdom of Knighton. It focuses on the Nexo Knights as they journey to defeat Jestro the evil jester, the Book of Monsters, and their lava monster army. Clay leads the Nexo Knights, which include Macy, Lance, Aaron, and Axl. Together, under their mentor Merlok 2.0, they band together to defeat Jestro! who becomes humbled and good again. Later, the evil cloud Monstrox comes and turns Jestro evil again by zapping Jestro with a lightning bolt that can turn anyone evil (or bring stone statues alive). Jestro and Monstrox then team up to fight the Nexo Knights again, this time with a stone army instead of lava. The Nexo Knights ultimately defeat Jestro, Monstrox and Ruina with Jestro becoming good once again. 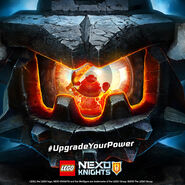