Naare first appeared in 2016 as part of the LEGO Star Wars: The Freemaker Adventures line.

After Rowan discovers part of the ancient Kyber Saber, he is met by Naare. She claimed to be one of the last Jedi remaining, and told the young Rowan the legend of the Kyber Saber. She is then invited by Zander Freemaker to join the siblings at their shop. After using a Jedi mind trick to help the Freemakers with their rent, she then goes into her room. There, she is greeted by the holograms of Darth Vader and Emperor Palpatine. She reveals she was just gaining the boy's trust as she pulls out a red lightsaber, that reveals her red tattoos and yellow Sith eyes.

When getting into an argument with Kordi about Rowan needing to find the next Kyber Saber Crystal, the boy runs away along with Roger. When she arrives to his aid, she uses her powers to save Rowan from Graballa the Hutt. When Rowan reveals that he lost the crystal in the asteroid field, she turns to her Sith side and opens fire on the Freemaker's StarScavenger. However, when the ship catches the crystal, she reverts to her normal side and celebrates the finding of another fragment.

Naare eventually assembles all the fragments of the Kyber Saber and reunites it, upon which her power is immeasurably increased; drunk on her new might and infuriated with the Emperor's constant criticism, she travels to Coruscant to depose Palpatine and set herself up as Empress of the Galaxy. Handily dispatching the Imperial forces sent to stop her, she soon arrives only to find Rowan waiting for her in the Emperor's office, leading to a final confrontation between the former master and student. Rowan then unleashes his secret weapon: his ability to call to the Kyber Saber crystals, which he uses to rip the weapon from Naare's grasp. After subduing her, Rowan was tempted by the Emperor to strike her down, but refused, leaving Naare to be blasted by the Emperor now that she was left with her own powers. Weakened, Naare fled while the Emperor was distracted by the Freemakers' escape, only to be captured and frozen in carbonite by her former partner Graballa. 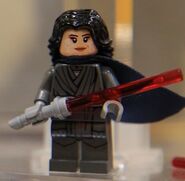