Mr. Ollivander is a minifigure from the Harry Potter theme. He first appeared in LEGO Harry Potter: Years 1-4, but in 2011 he appeared as a physical minifigure for the first time in the set 10217 Diagon Alley, along with his wand shop.

Garrick Ollivander is the proprietor of Ollivander's Wand Shop in Diagon Alley. Ollivander is widely considered the best wand maker in the British Wizarding world, and many wizards and witches purchased their wands from him. In 1996, he was captured by Fenrir Greyback and tortured by Lord Voldemort for information on the location of the Elder Wand and on how to kill Harry Potter without using his wand. He was imprisoned in the cellar of Malfoy Manor until April 1998, when he, Harry Potter, Ron Weasley, Hermione Granger, Luna Lovegood, and Griphook were rescued by Dobby the house-elf. A little while after he was rescued, Harry Potter questioned Mr. Ollivander about the Elder Wand.

In the video game, Ollivander has brown legs and torso printing consisting of a brown jacket and grey shirt. He has a smiling flesh-coloured face with a grey beard, and a grey hairpiece, in the same mould Harry Potter's. In physical form, Ollivander is very similar to how he had appeared in the video game except he has a stubble pattern on both of his lips and dark grey legs rather than brown. 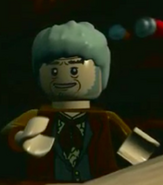 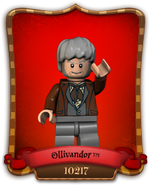 Ollivander in CG
Add a photo to this gallery