"Uh-oh, looks like a robot generator! Eggman uses them to pollute the world with Badniks! Let's blow it up!"
―Tails in LEGO Dimensions 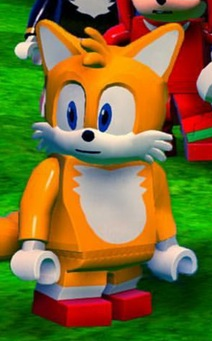 Miles "Tails" Prower is a non-playable character in LEGO Dimensions.

Miles "Tails" Prower is an anthropomorphic fox cub born exclusively with two twin-tails, hence his nickname and because of his abnormality, Tails was the subject of bullying during his youth. One day however, he met Sonic the Hedgehog and was inspired to become as cool as him after seeing him run like the wind. Tails soon after began following Sonic on his adventures and has since become his best friend and sidekick.

Tails, alongside Shadow the Hedgehog, Big the Cat and Knuckles the Echidna, is first shown imprisoned by Dr. Eggman and later released by Sonic. Later, he helps Sonic in finding Chaos Emeralds and finally defeating Dr. Eggman and Chaos.

After main story of Sonic the Hedgehog is completed, Tails can be met in his own dimension and can give a quest to a player, where a player must help Tails destroy Dr. Eggman's Roboticizers.

Retrieved from "https://lego.fandom.com/wiki/Miles_%22Tails%22_Prower?oldid=1946239"
Community content is available under CC-BY-SA unless otherwise noted.