Meltrox is a species of Rock Monster from the Power Miners theme. The Meltroxes are angry, destructive, and full of rage.The name Meltrox is a play on the words "Melt" and "Rocks". Meltrox has two cousins, Tremorox and Infernox. Meltrox is a very common rock monster and comes in many sets.

Meltrox is made up of two pieces, a head, and a body. The head is stone grey, and is textured like an uneven rock. The body is able to be disassembled into 3 parts, but comes assembled in the box, and is only considered one piece. Two of the pieces are arms, which like all minifigures, are able to hold objects. However, their wrists do not turn like the normal minifigure, and their hands are also much larger. The third piece is the main part of the body. It is mostly made up of transparent red plastic, but it also has chunks of stone grey in it, which makes it look like a mixture of large pieces of red crystal and rocks. The entire body piece has the same rocky texture as the head. The head is attached on a hinge, allowed the entire thing the flip upwards. When open, the inside of the body is hollow, allowing you to put a crystal inside of it, and close the mouth.

Meltrox are common Rock Monsters that are always angry. Once they eat a power crystal they get large surges of anger that they use to go destroy things. Meltroxes are always the first to attack the Power Miners, even when there's crystals for the taking. 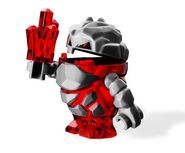 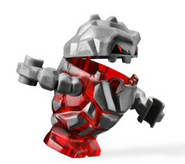 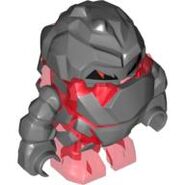 A CG image of Meltrox
Add a photo to this gallery
Retrieved from "https://lego.fandom.com/wiki/Meltrox?oldid=1819220"
Community content is available under CC-BY-SA unless otherwise noted.