Maccus served as First Mate aboard the Flying Dutchman under Captain Davy Jones. He appears in LEGO Pirates of the Caribbean: The Video Game and is included in the set 4184 The Black Pearl.

Maccus was a crew member of the Flying Dutchman under command of Davy Jones. He, along with the other crewmen, became half-hammerhead shark and half-human. His left eye migrated from its socket over to the left side of his hammerhead, while socket on the right side of his hammerhead was empty along with the socket on left side of his face. His body was covered in barnacles, coral and starfish and his teeth took the appearance of a shark. A lobster shell gauntlet grew out of his back along with few lobster legs. He was an expert swordsman and in battle he mostly fought with an axe and sometimes with a sword. He was Davy Jones' most trusted crew member along with Penrod, Ratlin and Angler. He fought Will Turner on the wreck of the ship and was seen on the Black Pearl when Davy Jones confronted Jack Sparrow. He seemed to share Davy Jones' penchant for causing pain and destruction, as seen when Davy Jones ordered the crew to summon the Kraken, he gave the command with an evil smile. When Davy Jones found out that his heart was in danger, he sent Maccus and some other crew members to retrieve the chest. He witnessed the destruction of the Black Pearl and said that even Jack Sparrow cannot escape the Kraken. He served on the Dutchman during the reign of Lord Cutler Beckett. He fought in the battle of Calypso's Maelstrom where he confronted Will Turner and duelled him again, but Pintel and Ragetti fired Jack the Monkey into his face, knocking him onto the lower deck. He reverted back to his human form when Will Turner killed Davy Jones, and he helped other crewmen to destroy Cutler Beckett, his ship and the East India Trading Company armada. 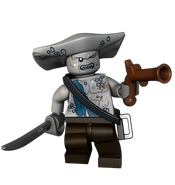 A CGI of Maccus 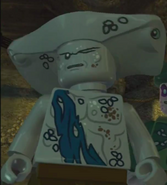 Maccus in LEGO Pirates of the Caribbean: The Video Game

Maccus' Character Token
Add a photo to this gallery

Retrieved from "https://lego.fandom.com/wiki/Maccus?oldid=1570181"
Community content is available under CC-BY-SA unless otherwise noted.