Lucius Malfoy is a minifigure from the Harry Potter theme. He is the husband of Narcissa Malfoy, and the father of Draco Malfoy.

Lucius Malfoy has appeared in six sets so far. In 4766 Graveyard Duel, he had a two sided head, one being his normal face and one being the Death Eater mask he wore. In 4736 Freeing Dobby, Lucius again has a double sided face with a Death Eater mask, however, this version is different from the first one. In 10217 Diagon Alley, Lucius comes with his usual blond hair, and a black hood to be worn with his death eater mask, as a "death eater disguise." This is the same hood used for Dementors.

Lucius Malfoy (b. 1954) was a pure-blood wizard, and son of Abraxas Malfoy. He was also the husband of Narcissa Malfoy, and the father of Draco Malfoy. Lucius was an aristocratic wizard who believed strongly in notions of blood purity, and thus joined the Death Eaters and participated in the First Wizarding War. After Lord Voldemort's first defeat, Lucius managed to avoid imprisonment by claiming that he had been acting under the Imperius Curse. He and his family remained members of the social elite, though Lucius continued to demonstrate his prejudice. He attempted to sabotage Arthur Weasley's career by slipping Arthur's daughter an old school diary of Tom Riddle's, opening the Chamber of Secrets in 1992, and in 1994, he participated in the humiliation of a Muggle family after the Quidditch World Cup.

When Voldemort returned, Lucius once again served him as a Death Eater, leading the efforts to obtain the prophecy Voldemort sought. In the battle that ensued, the prophecy was destroyed, and Lucius and his comrades were imprisoned in Azkaban in 1996. Although Voldemort broke them out of prison in 1997, he was displeased with Lucius for his failure and treated the Malfoys with disdain. Lucius and his family defected at the end of the Second Wizarding War and were thus pardoned for their crimes after Voldemort's final defeat. He and Narcissa later had a grandson, Scorpius Malfoy, after Draco married Astoria Greengrass. 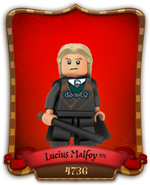 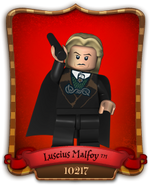 Malfoy (from 10217 Diagon Alley) in CG Oddly his name is spelled wrong. 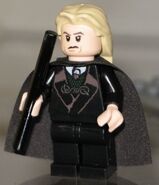 Flesh Lucius Malfoy's redesign on display at the 2010 Toy Fair

Lucius with his Black Wand 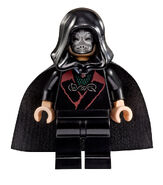 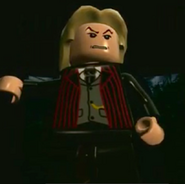 Lucius Malfoy in the video game. 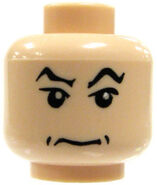 Malfoy's flesh skin face from the Goblet of Fire. 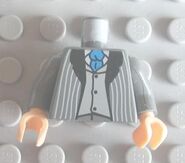 Old version of Lucius and Sirius Black in Department Of Mysteries 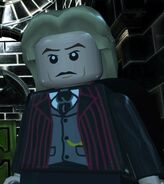 2010 version of Lucius in LEGO Harry Potter: Years 5-7
Add a photo to this gallery