Lucifer is a cat character from the Disney Princess theme in 2014 and 2019.

Lucifer reuses the cat single-stud mold introduced for the Friends theme. It features Lucifer standing up with bent back, elevated head looking straight ahead and long tail lying flat curled around the left side of his body. He has black fur with patches of white on his chest, face, front paws, inside its ears and at the end of the tail. He has green eyes and a mild expression on his mouth. Some accessories, like a bow, can be attached to a little hole on the top of his head.

In Disney's animated Cinderella movie from 1950, Lucifer was a tomcat owned by Cinderella's stepmother. The malicious creature was known for mischief, like hunting the Mice befriended with Cinderella, provoking her dog called Bruno and ruining her cleaning by leaving sooty paw prints all over a freshly polished floor. 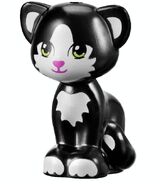