The Lizard Man is a Collectable Minifigure, released in 2011 as one of the sixteen minifigures from 8805 Minifigures Series 5. He also appears with the Gorilla Suit Guy in the LEGO Marvel Super Heroes TV Short.

Similar to the Gorilla Suit Guy from Series 3, he comes with a new green dinosaur mask, with its mouth open to allow the minifigure to see, and a tail piece that clips around his neck. The torso of the minifigure is green with a buff, tan printed chest resembling scaled plating. The legs are also a green colour.

The Lego Movie 2: The Second Part

The Lizard Man is seen in an unknown city alongside other brainwashed minifigures and minidolls dancing to the Catchy Song surrounding Emmet and Rex Dangervest. Multiple Lizard Men are also seen in the crowd attending the wedding of Queen Watevra Wa'Nabi and Batman and they are also seen crying when Emmet crashes the wedding and destroys the cake. 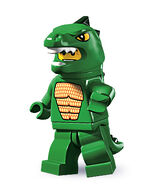 The Gorilla Suit Guy with the Lizard Man and Loki in the LEGO Marvel Super Heroes TV Short.

The Lizard Man as seen in The LEGO Movie.

The Lizard Man in The LEGO Movie 2: The Second Part.
Add a photo to this gallery