Various non-physical minifigures appear in media for the Hidden Side theme.

Captain Archibald (voiced by Corey Kruger) is a ghostly Big Figure sea captain who is the main antagonist of the Hidden Side Episode "Sink or Swim". He has a large, ghostly octopus that has wrapped its tentacles around his body, which it uses to attack enemies.

Chef Silento (voiced by William Kasten) is a ghost chef with six pairs of arms who is the main antagonist of the Hidden Side Episode "Don't Choke Now".

Dr. Drewell (voiced by Paul Edwards) was once a brilliant scientist before becoming one of Newbury's most dangerous ghost residents in Good Chemistry. Though initially antagonistic, he developed a mutual attraction to J.B.

Grandpa Sam is a old man ghost that appears in Face Your Fears.

Harry Cane (credited as the Weather Boss Ghost and voiced by William Kasten) is the primary antagonist of the Hidden Side Episode "Flying Lessons". He resembles a Big Figure with no legs and a propeller back pack, and has the ability to manipulate the weather.

Lady Evelina, often referred to as Lady E or just the Lady (voiced by Lindsey Alena) is the leader of the ghosts who have invaded Newbury, having already taken control of the Hidden Side. A portrait of her (included in 70425 Newbury Haunted High School) depicts her as a young girl with long brown hair and a white dress and sun hat, but with a smug-looking expression.

In the Hidden Side Episode "Skeleton in the Closet", her ghostly minions use soul essence collected on her orders as part of a ritual with the Blood Moon in order to bring her through to Newbury. Jack Davids, Parker L. Jackson, J.B., and Douglas Elton intervene in an attempt to stop her, but are unable to prevent a portal from being opened. Lady E begins emerging from it as a skeletal horror still wearing her hat and possessing hair, and proving immune to the heroes' anti-ghost equipment. However, Douglas is able to banish her back to the Hidden Side by jumping in the path of the light from the Blood Moon, but is drawn through himself in the process. Returning to Newbury as a skeleton, he warns his friends that an enraged Lady E is already seeking another means of escape. 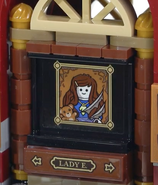 A portrait of Lady E.
Add a photo to this gallery

Mr. Nibbs (voiced by Bruce Baker) is a monstrous Big Figure bear created from the teddy bear of Lady Evelina.

Nanny Mamali (voiced by LC Curci) is an elderly ghost woman who appears in the Hidden Side Episode "Vlog Hog."

Samuel Mason (voiced by Chris Molinary) is another ghostly Big Figure, an Old West Outlaw who can shoot ghostly energy blasts from his fingertips in similar fashion to six-guns. Disturbingly, his silent partner, John C. Newt, is a Minifigure-sized ghost who appears to be growing out of his hip. Both ghosts can launch energy blasts, though Mason seems to be the muscle of the pair in the Hidden Side Episode "Life in the Ghost Lane".

Spewer (voiced by Michael R. Johnson) ghostly entity made up of all kinds of trashed items in Potty Mouth.

Tragico (credited as Clown Boss Ghost and voiced by Mike Anthony) is the main antagonist of the Hidden Side Episode "Carnival of Doom". He is a large clown with three heads stacked on top of each other.