"I would not order a charge that I did not lead myself. Swords up, shields ready…and to battle!"
―Lead General

The Lead General is a minifigure from the Castle (2007) theme.

The Lead General has light grey legs with dark hips. His torso is unprinted and, along with his arms, is light grey, while the hands are dark grey. He wears a light grey breastplate with a gold crown at its center and several lines of rivets. A black strip runs across his midsection. He has rode a horse and a dragon. He has a face identical to Rascus', a knight from Knight's Kingdom II. The helmet of the Lead General is light grey and has a metallic silver visor that can hinge up and down. The visor has two eye holes, sticks out in a point in front of his face, and is also seen on the Golden Knight.

The Lead General is the Crown King's army leader. He is featured in many Castle (2007) sets, and is usually seen with a lance and shield and riding a horse. 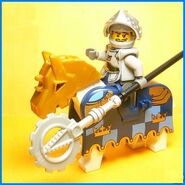 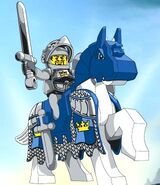 Add a photo to this gallery
Retrieved from "https://lego.fandom.com/wiki/Lead_General?oldid=1918470"
Community content is available under CC-BY-SA unless otherwise noted.