LEGO Star Wars: Bombad Bounty is a mini-movie based on the Original Trilogy of the Star Wars Theme. It was premiered online for the first time on November 4th, 2010. Shown in two parts, it was produced by M2Film, which had collaborated with LEGO before in the short films LEGO Indiana Jones and the Raiders of the Lost Brick (2008), and The Quest for R2-D2 (film) (2009).

The plot follows that of the original trilogy. Part 1 begins with the video recalling the start of A New Hope with an Imperial Star Destroyer right on the tail of the Tantive IV. Following the intrusion of Imperial Stormtroopers, Jar Jar Binks appears as a janitor wiping the floor of ship. At this point everyone freezes as Jar jar passes by, and after leaving, the fighting resumes as the Rebel troopers are shot backward. Afterwards, Darth Vader walks in but slips on the wet floor; he lands on his back and is taken away on a stretcher while Jar Jar puts puts a wet floor sign.

Meanwhile, on the Imperial Star Destroyer, Darth Vader has a cast on both his left arm and leg. Watching LEGO Indiana Jones and the Raiders of the Lost Brick, Darth Vader hires Boba Fett to eliminate Jar Jar, switching channels to reveal a mug shot of Jar Jar. Boba Fett leaves and Darth Vader changes channels again to the "Cooking Jabba" channel.

Boba Fett leaves the Imperial Star Destroyer onboard his personal craft, the Slave I. He heads to Tatooine, knocking R2-D2 off a ledge. Entering the Mos Eisley Cantina, Boba finds Jar Jar with what appears to be a cone of pop-corn.

Suddenly, a blaster bolt flashes by, and Greedo is carried away dead on a strecher by Imperial troopers, shot by Han Solo who escapes with Chewbacca through what appears to be the exit. A character resembling Wuher pulls out a vacuum cleaner for Jar Jar and pulls the rip cord on the vacuum, activating it. Out of control, Jar Jar sucks in almost everyone including the Bith playing in the Cantina.

Speeding past Boba Fett, Jar Jar rushes out of the Cantina, hanging on to the vacuum which is dragging him forward. As he enters the Millennium Falcon,Luke Skywalker, R2-D2, C-3PO, Chewbacca, and Han Solo rush into Han's ship, chased by Stormtroopers. As they take off, unaware of Jar Jar, Boba uses a cable gun to attach himself to the Millennium Falcon as they head toward the Death Star.

Landing on the Death Star, Chewbacca can be seen taken away by stormtroopers. After they left, Jar Jar leaves the ship, unaware of Boba Fett. While vacuuming a corridor, Boba takes aim but is interrupted by Han Solo chasing two stormtroopers. Once again taking aim at Jar Jar, Boba is once again interrupted by a squad of stormtroopers chasing Han. Then Boba sees Indiana Jones running by but is too slow and gets run over by a boulder. As Jar Jar starts playing with the vacuum like a guitar, he gets carried away and his hand is reaching closer and closer to the Self Destruct button for the Death Star. Boba yells, trying to get Jar Jar's attention but it is too late. Jar Jar presses the button and a Self Destruct display of the Death begins with a three second countdown. In outer space, Jar Jar's music can be heard before the Death Star blows up.

Part 2 begins with Jar Jar and Boba Fett floating helplessly in space. Later you can see the piece of the Death Star that Jar Jar was on land on the Planet Hoth. Hoth Rebel Troopers run by with a AT-AT walker and Snowtroopers giving chase. As the AT-AT passes by, Luke Skywalker is seen hanging onto the back. Jar Jar's "Piece of Death Star" is then picked up by the Wampa and thrown onto Tatooine.

Jar Jar lands and his "Piece of Death Star" shatters, crushing 3 Tusken Raiders as it falls. Jar Jar begins to vacuum toward 6210 Jabba's Sail Barge. The camera then shows Boba Fett aiming at Jar Jar from Jabba's Sail Barge. (If viewers pause the movie at that moment, in Boba's view, they can see that he has switched his blaster to kill mode.) He begins shooting at Jar Jar, but he misses. Jar Jar notices, horrified, and runs away. Boba flies out of the sail barge to get closer. He flies by a desert skiff where the battle from episode six is going on. He gets too close, and gets knocked into the Sarlacc pit. Jar Jar shows a look of disgust as he watches Fett fall in.

Boba is later shown burped out of the Sarlacc. It then shows a Rebel celebration. Jar Jar is inspecting his Vacuum and then gets an idea. He turns the Vacuum onto reverse mode and blows everything that he sucked in out. The pieces become a stage shaped like Jar Jar's head. The four Bith appear and lots of other recognizable characters are shown playing in a band. Jar Jar can be seen playing a Guitar shaped like the Millennium Falcon. It is revealed that the concert is being watched by Vader and Boba (both in casts), along with many other people, on TV. Boba wants to change the channel, then they both notice the remote standing between the two of them. They briefly fight over it, but it falls to the ground, which means they still have to watch the concert.

R2-D2 and C-3PO as seen at the beginning of the mini movie.

Stormtroopers arriving at the Tantive IV. 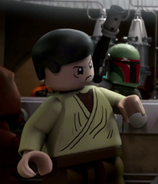 Wuher in the Mos Eisley Cantina.

Boba Fett in the Death Star.

Yoda on the Drums.

Fett and Vader looking at remote.
Add a photo to this gallery

Retrieved from "https://lego.fandom.com/wiki/LEGO_Star_Wars:_Bombad_Bounty?oldid=1956065"
Community content is available under CC-BY-SA unless otherwise noted.