This article is about one wooden toy. For the other wooden toy, see Wooden Duck.

This article is about a wooden toy. For other uses, see Duck.

The LEGO Duck is a Wooden Toys set released in 1935. It contains a wooden model of a duck, and was one of the first toys ever made by LEGO. It is also arguably the most popular of the wooden toys ever produced by LEGO. It features rolling wheels and a string with a knob so it can be pulled along.

Unlike modern LEGO sets, this model only consists of one piece, being made completely of wood. It was released at the same time as the Wooden Train. The colours of the duck are an orange mouth, black head, tail, and wings, and a red body. The duck sits on a black piece which stands on four red wheels.

When the wheels move, the beak of the duck opens and closes by means of a cam connected to the wheels, meaning it was made with some other construction elements than just wood.

Lego Duck on the Creativity Tree in Lego House. 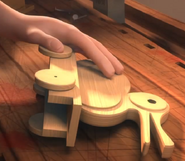 A LEGO Duck being made in The LEGO Story.

Ole picking up burnt LEGO Duck drawing (The LEGO Story)
Add a photo to this gallery
Retrieved from "https://lego.fandom.com/wiki/LEGO_Duck?oldid=1962821"
Community content is available under CC-BY-SA unless otherwise noted.