Until now, the Justice League has triumphed over every foe who has challenged them. This time, they face Brainiac: a super-intelligent invulnerable machine whose mad quest endangers all worlds in the galaxy. When Brainiac sets his sights on Earth and zaps Superman, Wonder Woman and Green Lantern to different places in time, the race is on for Batman and The Flash to re-assemble the Justice League! Can the Justice League prevail against an unstoppable intergalactic machine with the power to bend time itself!? 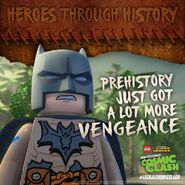 Add a photo to this gallery
Retrieved from "https://lego.fandom.com/wiki/LEGO_DC_Comics_Super_Heroes:_Justice_League:_Cosmic_Clash?oldid=1898094"
Community content is available under CC-BY-SA unless otherwise noted.