"Hey, come back here! I'm a clown, I can't afford to look ridiculous!!!"
―Krusty the Clown in the Simpsons episode Brick Like Me

Krusty the Clown (real name: Hershel Pinkas Schmoikel Yerachem Krustofsky) is a minifigure that was released in 2014 as a part of The Simpsons theme. He also appears in the Krusty the Clown fun pack is used for the LEGO Dimensions video game.

Krusty has a very similar appearance to Homer. He has a white-yellow face. He wears a pink shirt, lime pants, a blue tie, white hands, and yellow arms. His hair is aqua-green. He also has a red nose.

Krusty the Clown is the star of Bart and Lisa's favorite show "The Krusty the Clown Show" which features the violent "Itchy and Scratchy" Cartoons. He has been portrayed as an offensive and insane character. Krusty wastes his money carelessly and has been arrested at times. His company Krustyco. makes unsafe and dangerous products with dangerous side effects occurring on some of them. Krusty's burger chain Krusty Burger has meat made from other animals (such as Zoo animals, roadkill, mad cow beef, etc.) 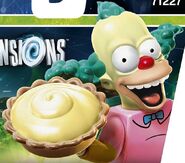 Appears in LEGO Dimensions boxart with an iconic laughing expression.

In LEGO Dimensions
Add a photo to this gallery