Krait is a Ninjago minifigure released in 2015, who has snake tattoos on his chest and head. 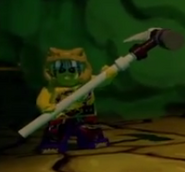 Krait in LEGO Dimensions.
Add a photo to this gallery