"Okay, you can sort this mess out!"
―Knuckles in LEGO Dimensions 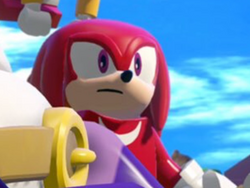 Knuckles the Echidna is a non-playable character in LEGO Dimensions.

Knuckles the Echidna is a character of Sonic the Hedgehog franchise and the current guardian of the Master Emerald, a powerful ancient relic which is his solemn duty to protect from anyone who wants to abuse it. He is also the sole remaining descendant of the Knuckles Clan and last of the echidnas on earth. Knuckles is an old friend and rival of Sonic the Hedgehog.

Knuckles, alongside Shadow the Hedgehog, Big the Cat and Miles "Tails" Prower, is first shown imprisoned by Dr. Eggman and later released by Sonic. Later, he is seen with other Sonic's friends in a rift.

After main story of Sonic the Hedgehog is completed, Knuckles can be met in his own dimension and can give a quest to a player, where they both must beat 25 Badniks.

Retrieved from "https://lego.fandom.com/wiki/Knuckles_the_Echidna?oldid=1946238"
Community content is available under CC-BY-SA unless otherwise noted.