King Théoden is a minifigure from The Lord of the Rings theme released in May 2012. He is exclusive to the set 9474 The Battle of Helm's Deep.

Théoden wears full armour and carries a sword and shield.

Théoden was the king of Rohan. When Saruman planned to take over Rohan, he put a curse on the king that was kept active by his traitorous advisor, Grima Wormtounge. Gandalf, however, freed him from the spell, giving Rohan back its king. Afterwards, with the help of Aragorn, Gimli, Legolas Greenleaf and Gandalf, Théoden played a key role in defeating the Saruman's army of Uruk-hai in the Battle of Helm's Deep. Afterwards, he came to the aid of Gondor, a neighboring kingdom of men. He was killed in the ensuing battle by the Witch-King of Angmar after he was thrown off his horse by the Witch-King's Fell Beast. 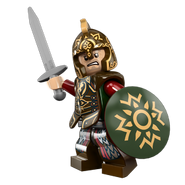 King Théoden at the Toy Fair

King Théoden in the Gamescon demo for LEGO The Lord of the Rings: The Video Game

Théoden while possessed by Saruman 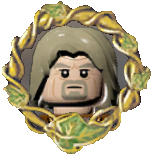 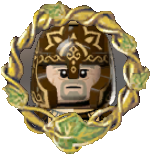