The King is a Castle minifigure that was released in 2013.

He has a Gold crown and sword. He dons a blue cape and wears a necklace with a crown pendant on the torso. His face bares resemblance to many other LEGO King minifigures such as having a brown beard and a expression showing courage. 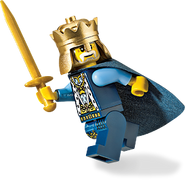 The King in LEGO Worlds. 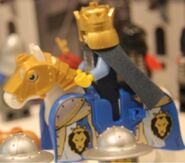 On his Horse
Add a photo to this gallery
Retrieved from "https://lego.fandom.com/wiki/King_(Castle_2013)?oldid=1955891"
Community content is available under CC-BY-SA unless otherwise noted.