"I, Maximus...err...'Jor-El' must try to save my son, Kal, by sending him off planet with all our civilization's genetic knowledge hidden in his tiny baby pants."
―Jor-El in LEGO Batman 3: Beyond Gotham

Jor-El is a DC Universe Super Heroes minifigure released in 2013 and also appears in LEGO Batman 3: Beyond Gotham as part of the "Man of Steel" DLC. He was Superman's father and Lara Lor-Van's husband.

Jor-El has tousled dark brown hair and his face is printed with brown eyebrows and a full beard with flecks of grey. He has a dark brown cape. His torso, arms, hips, and legs are dark blue while his hands are flesh. His torso is printed with dark blue neckline. His logo which is a large brown "S" (meaning "hope" in Kryptonese) and some dark gold, the suit's cut on his body, a gold oval and silver embroidery which continues onto the legs. The back printing is similar to that of Superman's Man of Steel variation.

Jor-El was a renowned scientist on Krypton married to Lara Lor-Van. He attempted to warn the Kryptonian council about Krypton's destruction due to its unstable core and wanted to send a Kryptonian genetics codex to other worlds to save their species, but the council refused. General Zod, his old friend, and his army then arrived and tried to overthrow the council, and Zod offered him a place in reshaping Krypton's government. Jor-El refused, escaped and stole the codex.

He returned home, and imprinted the codex on his newborn son, Kal-El, who was the first naturally born Kryptonian in centuries. They prepared to send him to Earth before Zod arrived, and when he did, Jor-El fended him off, long enough for Laura to launch Kal-El's ship. Zod then killed Jor-El in rage.

Clark Kent (Kal-El's Earth name) discovered an ancient Kryptonian scout ship, and inserted Jor-El's artificial intelligence into the ship's mainframe. Jor-El explained Krypton's history, Zod's intentions, and why he was sent to Earth. He also presented Clark with his uniform.

Lois Lane later called on Jor-El to help her escape Zod's mothership. Jor-El helped his son escape the ship and sent him to stop Zod.

Zod took control of the scout ship and Jor-El attempted to talk him out his plan to turn Earth into a new Krypton. However, the sectarian forced the A.I. to disappear and seemingly destroyed it.

An advert for his polybag 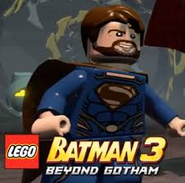 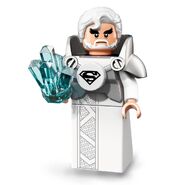 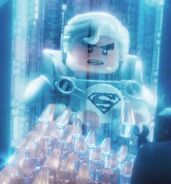