The Jamanakai Villagers appeared in the season two episode Rise of the Snakes in the Ninjago: Masters of Spinjitzu TV Show.

The Jamanakai Villagers were victims of Lloyd Garmadon's craving of sweets, where he would constantly and relentlessly bother the villagers, until he located the Hypnobrai tribe and used the snakes hypnotic abilities to hypnotize the villagers and steal their candy. They also appeared for a brief moment in episode 4. During the montage in which Lloyd and Pythor are causing mischief, they are on a scooter together knocking over trash cans while the villagers yell at them. It seems, that after Episode 1 of season two, Lloyd had a grudge because he and Pythor wrecked parts of it.

Nya with the Hypnotized Jamanakai Villagers 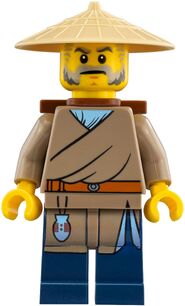