He has spiky yellow hair and and a neutral expression with cheekbones. He has a blue jumpsuit with black hands. The Human Torch's torso is printed with a black collar and belt, muscles, and the Fantastic Four's insignia.

When on fire he has his basic body design, but is covered in an orange fire pattern and his mouth and eyes change to white.

His abilities include Flame-on, flight, launching fireballs, and heat blasts to destroy gold objects in the video game.

Johnny Storm is a member of the Fantastic Four (which also includes the Thing, the Invisible Woman, and Mister Fantastic) and fights enemies such as Galactus and the Four's archenemy Dr. Doom. Along with the other three, Storm was exposed to cosmic radiation and he became able to engulf his body in flames and use various fire-based attacks. He is Invisible Woman's brother and Mister Fantastic's brother-in-law. More recently, he is the uncle of Franklin Richards and Valeria Richards.

Currently, he has been an active member of the Avengers and the Inhumans. 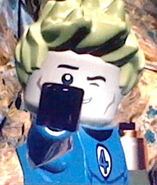 Add a photo to this gallery
Retrieved from "https://lego.fandom.com/wiki/Human_Torch?oldid=1954680"
Community content is available under CC-BY-SA unless otherwise noted.