"“They may take our bricks, but they’ll never take our imagination!”"
―Highland Battler

The Highland Battler is a Collectable Minifigure released in 2012 as one of the sixteen minifigures from 8827 Minifigures Series 6 and a playable character in the LEGO City Undercover game.

The Highland Battler has brown legs with a printed Earth Blue kilt. His torso shows armor, straps, and buckles and his arms are bare. The head has some orange stubbles and an angry, warlike expression on it. The Battler has long, dark brown hair and carries a shield of the same colour. He also has a grey sword of the type used in the Lord of The Rings theme. 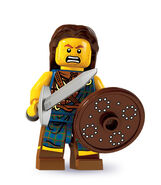 The Highlander from LEGO Battles
Add a photo to this gallery

Retrieved from "https://lego.fandom.com/wiki/Highland_Battler?oldid=1962087"
Community content is available under CC-BY-SA unless otherwise noted.